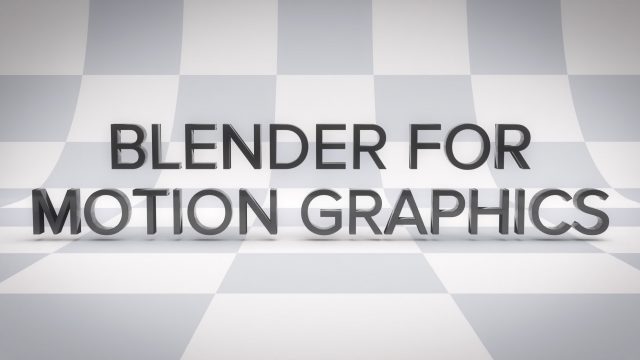 I want to make a case today, and I suppose it could be a bit surprising.

Or maybe not too surprising if you’ve been following my work for the past year or so.

What is the case I want to make? Well, I think more people should be using Blender for motion graphics.

I think it’s an incredible tool in a lot of ways, and it’s an even more incredible value because it’s free and open source software.

I’m a Final Cut Pro user for video editing, so naturally the tool of choice that I’ve always used for motion graphics is the excellent and inexpensive Motion, which is also developed by Apple. Motion is the tool I use to create templates such as Titles and Generators for Final Cut Pro.

Motion is great for a lot of reasons, and it’s an ideal tool for many projects. But here’s the challenge: It only allows you to create 2.5D projects (I pronounce this like "two and a half 'D'"). Yes you can work in 3D space, but the objects themselves are only two dimensions (with the exception of 3D text, which still doesn’t behave perfectly with other objects).

Yes, it’s better than being 100% two dimensional, but it’s not true 3D. You can’t easily add a sphere to a project for example.

I don’t have any inside knowledge about this, but I doubt that Apple will turn Motion into a full 3D app (although there is the mO2 plugin you can purchase that adds lots of 3D capabilities to Motion).

Enter Blender. Blender is free and open source software, and it allows you to create true 3D objects in a true 3D space. You can model any kind of 3D object you want. You can create basic 3D scenes, all the way up to the most advanced Pixar-like 3D scenes you can imagine, given the skills, the hardware, and the time.

I should mention here that I’m aware that Cinema 4D is considered the industry standard for 3D motion graphics. I only have a small bit of experience with it, so I can’t speak to how it compares with Blender, other than it’s quite pricey compared to Blender's price of zero. From what I’ve seen, Cinema 4D has plenty of great tools that are specifically designed for creating motion graphics.

It’s possible that Blender will get more motion graphics tools in the future as well.

Animation Nodes is an essential tool for Motion Graphics in Blender

There’s a specific tool that I consider essential for creating motion graphics in Blender, and the tool is called Animation Nodes. It’s a free addon for Blender. (An addon in Blender is the same thing as a “plugin” in other software, just a different term for the idea.)

Blender certainly has some useful motion graphics tools built-in like the powerful particle system, the physics simulation tools, and the liquid and smoke simulation tools.

That said, Animation Nodes brings some valuable functionality. Without going into too much detail, here’s my short description of Animation Nodes: It’s a tool where you can use nodes to create different animations and effects procedurally/programmatically.

For example if you want 100 cubes to undulate up and down in a scene, you can use an Animation Nodes tree to create 100 instances of cubes, and then animate them automatically, instead of having to manually create duplicates of cubes and use keyframes to animate them individually, which would take far too long.

I love Animation Nodes and I’m improving my skills with it over time. There are several great tutorials on YouTube that can help you get started with it (I especially like the ones by ChrisP).

It’s not a perfect tool yet, however. It’s still in Beta, so it sometimes crashes or produces unexpected results. And if you don’t have experience as a programmer, it might take a bit of time to get a solid understanding of how the nodes work together in terms of data types and inputs and outputs.

But if you watch some tutorials and spend time studying the Animation Nodes documentation, you’ll start to pick up how they work. It’s a powerful, time-saving tool, and I’m excited to see how it develops further in the future.

If you’ve taken the time to learn how to use Apple’s Motion, then the skills that you’ve developed there transfer nicely to Blender.

Knowledge of interpolation methods (which I think are some of the most important things to understand about creating animations) transfer to Blender nicely. In fact, Blender has even better tools for working with interpolation methods and keyframes, in my opinion. (Ever since I’ve worked with the “Dope Sheet” in Blender, I’ve found myself wishing Motion had a Dope Sheet as well.)

All of the knowledge about positioning items in 3D space within Motion transfers over to Blender. Lights and shadows work in a similar way.

If you’ve worked with materials on 3D text in Motion, then you’re already familiar with the concept of materials which apply to nearly all objects in Blender.

Working with Blender Has Challenges

Those of us that are Final Cut Pro users are naturally Mac users. Even though Blender works fine on a Mac, it’s not optimized for the Mac the way it is for a PC because it’s optimized for Nvidia graphic cards, which modern Macs don’t use. Because of that, we end up rendering using our systems’ CPU’s which means that the more powerful Mac we have in terms of CPU cores, the better.

Another challenge with Blender is that rendering takes longer compared to Motion. Even very complex Motion projects can usually be rendered much faster than Blender projects.

That said, it’s a trade-off because the quality of the imagery in Blender can be realistic and photographic in a way that Motion simply can’t achieve.

Blender comes with two main render engines, Cycles and Eevee. Cycles is more realistic and photographic, and therefore takes longer to render. Eevee is meant for faster rendering, but still can produce beautiful results. I prefer the look of Cycles rendering, but it’s hard to argue with the speed of Eevee.

Because I frequently use Cycles for rendering, I also use a cloud render farm called Render Street, which is a paid service. When many of the animations I create would take 20–30 hours to render on my local system, I’m happy to pay for the cloud rendering service where I can upload my project’s .blend file, let their computers do the work, and then download a completed render 10 hours later.

Even with these challenges, I still think Blender is an amazing tool for motion graphics.

We Can Use Blender with Apple’s Motion

I’ve been using Blender to create 3D animations that I then import into Apple’s Motion to add drop zones and turn the completed projects into Final Cut Pro templates such as Titles and Generators.

The two tools can certainly work together well.

If I want to create a background with animated 3D objects, I can create that animation in Blender, then take the finished rendered video and import it into Motion where I then add a Drop Zone or some text or whatever I want.

One useful tool for this is the “Loop End” marker in Motion. If I create a looping animation in Blender, then import it into Motion, when I add the Loop End Marker, I can turn that animation into an infinitely looping Generator for Final Cut Pro. This is perfect for abstract background animations, for example.

So where do you start?

Let’s say that you want to start learning Blender. Where do you start?

There are plenty of great resources on the internet, and I’ve been through several of them. My favorite by far is The Blender 2.8 Launch Pad Course from CG Boost (affiliate link). I paid for it, went through the entire course, learned a lot, and then registered to become an affiliate because I knew I’d be referring folks over to them.

I can’t overstate how useful that course is. I’ve paid for (and completed) several courses, and the Blender 2.8 Launch Pad Course was the most useful. It will help you get up and running with the fundamentals of using Blender.

In addition to that, the Blender Foundation (the incredible folks developing Blender) has released several Blender Fundamentals tutorials. It’s great information and useful, but not nearly as in-depth and useful as the Launch Pad Course above.

Once you’re comfortable with the basics of Blender, then start taking a look at specific tools like the physics simulation tools and the particle systems.

And of course, start learning Animation Nodes. I’ve already said how important that tool is for motion graphics.

I’ve been using Blender for professional projects for a little over a year now, so I’ve come a long way. That said, I still consider myself sort of an “advanced beginner” with Blender. I still have a lot to learn.

But I love it. I love the completed animations I create with Blender. And I love the price (zero!).

I just can’t believe this powerful software is free when its competitors cost thousands of dollars per year to license.

So even if Blender might not have all the ideal tools for motion graphics that something like Cinema 4D may have, the price tag makes it an irresistible tool for me.

So yes, I think more people should be learning to use Blender to create motion graphics.

Download a free collection of 35 templates for Final Cut Pro.

Yes, they're really free, even for commercial purposes. Click the link below to get started: